In the seventies and the eighties the Bay area of San Francisco was a pivotal site in the movements for civil rights, gender rights and LGBTQ rights. Arts and theaters in particular have tried to depict these events through their plays. It is quite striking to see how some theaters have brought the spotlight on certain topics. The most obvious one is AIDS since it is the number one cliché-word that peopleassociate with the gay community.

The pioneer: The Rhinoceros theater

The Rhinoceros theater is the « longest-running queer theater » and one of the first theater that brought the AIDS issue to the table with the play « The Normal Heart » by Larry Kramer. Larry Kramer is a big figure of the gay’s community’s presence in the Arts. This is the reason why the Rhino’s website dedicated a section to describe him and his accomplishments. This year the Rhino is bringing back Kramer’s Normal Heart to the scene. The play follows Ned Weeks, a gay activist infuriated with the fact that public officials and the gay community won’t recognize AIDS as a real disease. While he is trying to warn people about the danger of the disease, he also faces a plague of gay men of his entourage dying from the disease. The play invites us to pause and reflect on whether AIDS is as bad as it used to be when it was first discovered. The Rhino does not fail to make us question this issue often taken for granted since it can be healed nowadays. On their website we can visualize a post displaying a white heart in a red font. We could interpret these colours as white for peace and red for love. It is as if this display announcing the dates for the play was implicitly suggesting : a recovery. AIDS is no longer what it used to be.

Educating the youth on the subject

The New Conservatory Theater is a non-profit theatre which puts any money made into training underprivileged children in drama. It is a small theatre and has a very similar name to another larger theatre in San Francisco (the ACT-American Conservatory Theater not be confused). TNCT created adequate programs tackling issues that any homosexual could face – especially during their teenagehood.

The program called « YouthAware » features several artists that would come to schools to discuss AIDS related topics in class. On a visual aspect we can see on their website that their main target are children and teenagers. The images and the colours displayed are very playful and eye-catching. It is certainly due to the fact that they try to awaken young peole to the world of Arts. Adults are also involved however their participation is more noticeable in their role as artist-in-training. The artistsinterventions put together plays that tackle subjects such as AIDS, homophobia, gender expectation, peer pressure, dating and so on. AIDS is still a taboo subject that adults and teenagers struggle to discuss about. It seems as though heterosexuals have this preconceived idea that only homosexuals can get AIDS. Through their YouthAware programs TNCT tries to overcome this predjudice.

The Normal Heart was adapted and distributed as a movieTV film on HBO in May 2014. It won 2 Emmy Awards including Best TV Movie, and Best Supporting Actor (Matt. Bomer).  Distribution channels is defined as a “set of independent organisations involved in the process of making a product or service available for use or consumption by the consumer or industrial user” Kotler, Armstrong (1994, p. 395). 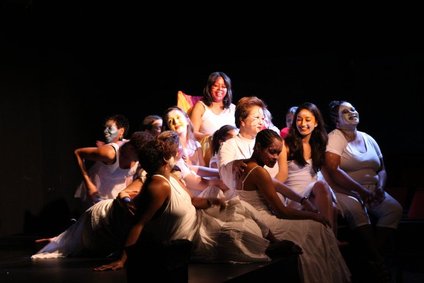 AIDS was often a disease that was associated with gay men. Often we forget the impact the AIDS’ stigma could have on one’s life. Rhodessa Jones artist-on-residence at Brava Women in the Arts theater and coartistic director of Cultural Odyssey, created The Medea Project to highlight the positive effects of drama for incarcerated women. It was developped to have theater productions that would put in perspective her vision of « ARTS AS SOCIAL ACTIVISM ». In 1989, following the results of classes she conducted at the San Francisco County Jail, Rhodessa Jones created « Big Butt Girls, Hard Headed Women », a play based on the lives of the incarcerated women she encountered. During the project she discovered issues that each female inmates were facing personnally. Issues such as as guilt, depression, and self-loathing, brought these females to feel like they did not have a place in the society. Once outside the bars of jail, female offenders were often recidiving because they did not had time to talk about these issues. That is why Rhodessa Jones decided to collaborate in 2008 with UCSF’s Women’s HIV Clinic to create «The Medea Project: Theater for Incarcerated Women » .

Her goal was to highlight the life of female inmates living with AIDS. The Medea Project: HIV Circle’s sucess led them to perform shows in several states. Overall Jones’main goal is to help women to transmit their stories. The Medea project worked so well that the Journal of The Association of Nurse in Aids Care qualified it in a study as «an expressive therapy group that helps women living with HIV to improves social support, self-efficacy, and the safety and quality of their relationships». Her project demontrateshow females inmates become more confident when society stops stigmatizing them. The website structure is visualized in the form a of a blog. Each category gathers various articles were the Medea project is mentionned (magazines, interviews…). From the content of the images we understand that the main audience targeted are women. The essence of this project is that this was made by a woman for women. Arts is a beautiful way to feel part of a community especially when groups such as the LGBTQ community remains marginalized by
society standards.

Although AIDS remains an incurable disease, nowadays more and more people learn to live with it. The rise of awareness that started in the eighties was impactful on today’s generations. The fight remains but it has become different. The communities and theaters in San Francisco are now fighting to unstigmatize the gay community. Through plays and programs these San Francisco theaters awaken the
population on AIDS.