In Delmer Daves’s The Hanging Tree, one of his last movies before his death in 1961, Gary Cooper is a natural in his tall, dark and brooding glory: the hero that is not so much a hero, rescuing the damsel-in-distress who, it turns out, is perhaps not really the one in distress. The Hanging Tree is a movie with some honorable qualities but also some flaws that impede the rhythm of the action. 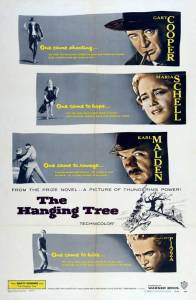 In 1870, Joe Frail (Gary Cooper), a doctor with a troubled past, settles in the small mining town of Skull Creek, Montana. Has he come to find gold? To escape from his mysterious and seemingly dishonorable reputation? Both? Is he a good or bad person, or maybe a little bit of both? His unorthodox methods and his sometimes ill-tempered character soon earn him the townspeople’s suspicion and distrust. Dr. Frail becomes the town’s new doctor, healing people and sometimes asking for unusual payments, until the peacefulness (well, as peaceful as a small developing mining town can be) of the settlement is broken by an attack on a stagecoach. The only survivor, a young woman from Switzerland, is found by Frenchy Plante (Karl Malden), who—as his sleazy demeanor clearly suggests—is not exactly a model of subtlety and respect towards womankind. Dr. Frail nurses back to health the beautiful and foreign (two qualities which make her suspicious in the eyes of the slightly uptight women of the town) Elizabeth Mahler (Maria Schell). However, while he was tender and patient with her during her convalescence, he distances himself from her as soon as she is well again, when he starts to feel that their relationship is evolving into something potentially romantic. And yet, Frail remains secretly protective of her even though Elizabeth quickly learns to stand for herself. As Frail becomes even more cryptic than he already was, the townspeople’s antagonism grows towards the doctor and his unsuspecting protégée.

Who is the true hero, really? Frail or Elizabeth? To the modern audience, Elizabeth probably is. While Cooper’s character is well-rounded, with a balance between his dark side and good side, it is not the case for the rest of the cast. George Grubb (George C.Scott), the alcohol-fueled preacher, is a funny yet useless character, whose great potential is not being fully exploited. The same can be said about Society Red (John Dierkes), the bad/greedy/dangerous but in the end ludicrous gambler that lacks characterisation and substance to be a real threat. Rune (Ben Piazza), seems also a bit inconsistent at times, as his character development from a thief to Frail’s forced assistant could have used a bigger part in the second half of the movie, but the character’s importance disappears in favor of Elizabeth. As the plot focuses on the relationship between Frail and Elizabeth, it loses the small interesting side-stories which evaporate around the plot.

The photography is not spectacular or exceptional, but nice and modest, and there are some really beautiful shots, particularly of the hanging tree. The movie is also full of little significant details, such as the location of Frail’s cabin on a cliff on the outskirts of the town, or even the character’s name (an austere and mysterious doctor whose name expresses weakness and fragility?), as well as in the development of the relationship between Frail and Elizabeth. Another quality of the movie that adds some continuity to the plot—as it foreshadows the resolution of the movie without giving away too much—is the title song  »The Hanging Tree », performed by Marty Robbins. It was voted one of the Top 100 Western songs of all time by the members of Western Writers of America. It was also nominated for the Laurel Awards and the Academy Awards in 1960.

This western, wavering between drama, comedy and adventure, is fundamentally a romance against a backdrop of gold rush, brawls and Rocky Mountains. Despite a storyline that lacks consistency and coherence, and a plot which remains quite predictable (especially if you pay attention to the song’s lyrics during the opening credits), The Hanging Tree remains a good movie, perhaps not unforgettable but definitely worth watching, if only for Cooper’s and Shell’s characters and performances.