More than just another cheap parody of Western movies, Ron Underwood’s City Slickers is actually a subtle tribute to the genre combined with a classic Hollywood tale about regaining control of one’s life.

Three friends go on a Western-themed trip in order to forget their troubles at home. Ed (Bruno Kirby) has always been afraid of commitment, especially now that he is newly wedded to a beautiful lingerie model. Phil (Daniel Stern) runs away from his castrating wife and his 19 year-old mistress who may or may not be pregnant. Mitch (Billy Crystal) suffers from a severe case of depression despite having a comprehensive and loving family. Will they find in the Wild West what eludes them in their urban lives? Will they learn how to get over their mid-life crisis and finally take the bull by the horns?

City Slickers begins as a comedy in which three urban dwellers—alongside two Jewish businessmen, two African-American dentists and one damsel in distress—are confronted with the harsh realities of a cattle drive like in the “good old days.” Most of the comedic situations originate from the opposition between the urban wannabe cowboys and the rough and tough lifestyle implied by this “revival of the old West”-themed vacation. The discrepancy between city and country life is always a fruitful ground for comedy, and Ron Underwood exploits it here with a contagious delight. From the cowboy hat shopping session to the harmonica tune near the campfire, the movie uses all the clichés of Westerns to highlight the comical awkwardness of this “urban bunch.”

Jack Palance, in the role of the manly, terse and lonesome cowboy, always puffing on a cigarette, embodies the mythical western hero to perfection. More than just the figure of the rough cowboy, Curly (Palance’s character) will soon become a mentor. Indeed, as the story unfolds, the three protagonists begin to understand that they have actually engaged in much more than a mere holiday trip, just as we realize that the film is much more than just another funny Western comedy. Despite the fact that the script sometimes relies a bit too much on easy formulas—namely the two so-called villains of the film—the scenes Crystal and Palance share together, as well as the real struggles which punctuate their trip, manage to bring enough emotion and depth to both the characters and their difficult journey to make the movie go beyond a mere parody of the genre.

In a more classic turn, City Slickers puts aside the funny situations and witty dialogues to focus on the personal struggles of each character and  how this adventure will enable them to overcome their mid-life crisis. Like many Hollywood heroes, Mitch, Phil and Ed eventually realize that this vacation is an opportunity to regain respectively a zest for life, manhood and a sense of commitment. 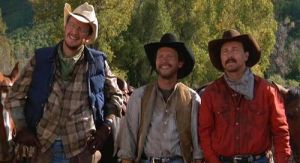 City Slickers is a predictable yet entertaining movie which not only uses the codes of the Western genre but also plays with them. One particular scene brilliantly displays the lasting impression Western movies have had on the collective imaginary: the triumphant arrival of Mitch, Ed and Phil, after struggling to bring the cattle safe and sound to the ranch, the soundtrack of The Magnificent Seven playing in the background, the three men humming the tune along as if they were themselves in a movie. This one scene cleverly highlights the importance of the genre and the mythology it has generated and perpetuated for so many years.

City Slickers may not be the funniest comedy, nor—more obviously—the best Western, but it certainly succeeds in reactivating this cinematic myth through an apparently not-so-subtle parody that gives way to a humorous and moving homage.