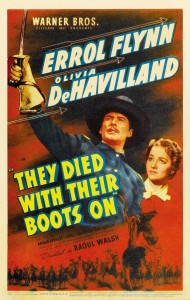 lar, They Died with Their Boots On can be considered as one of the best Westerns of the 1940s, a period of revival of the genre. Directed by the legendary Raoul Walsh and starring the sexy and adventurous Errol Flynn, this fictionalized account of General George A. Custer’s life is not a flawless masterpiece: it contains just as many imperfections as good qualities.

The film begins with a comical, light-hearted tone to introduce the arrival of George A. Custer (Errol Flynn) at West Point. Presented as likeable and undisciplined, he destroys the calm atmosphere of the Academy, giving the scenes rhythm with cheerful music, short dialogues and funny secondary characters. These three elements bring entertainment and dynamism throughout the film : in the love story between Custer and Miss Elizabeth Libbie Bacon (Olivia De Havilland), which is tinged with humour thanks to the presence of Libbie’s maid Callie (Hattie McDaniel) who helps the lovers to secretly meet; in the encounter with the hilarious old man California Joe (Charles Grapewin), which gives punch to the story between battles; in the scene where Custer teaches his troop his favourite song “Garryowen”; and even in the last battle scene where the rhythmic music accompanies hundreds of men shooting arrows and bullets. Yet, the mood alternates between comical scenes and darker or sadder ones.

Walsh succeeds in telling the story of Custer through lively transitions and intimate scenes. He highlights Custer’s love story with Libbie, making their relationship a perfect romance from beginning to end. Entirely devoted to Custer, Libbie follows him on military missions and abandons her upper-class privileges and comfortable life.

But, the plot is not a reliable example of 19th-century Western history. Indeed, it contains many historical inaccuracies in the account of General Custer’s life, or in the chronology of events. For instance, when he arrives at West Point in the 1850s, Custer, dressed like a dandy and accompanied with dogs, is depicted as a rich boy, whereas the real Custer grew up in a working-class family. Walsh also presents Custer as a charming and independent man, who is unruly at West Point, and yet ambitious enough to aim at commanding troops in wartime. So when the time comes to rest at home and to enter civilian life, he is depicted as a depressed man, which is wrong, too. After being assigned to a regiment again, Custer goes to the Black Hills, where the Sioux tribe lives. He meets the War Chief Crazy Horse (Anthony Quinn) to sign a peace treaty. But Ned Sharp (Arthur Kennedy), his nemesis at West Point, does not respect the treaty and sets off a war, historically called the “Battle of the Little Big Horn” and referred to as “Custer’s Last Stand”. Yet, the real Custer never met the Sioux War Chief. He was the one who provoked a gold rush by announcing the discovery of the precious metal in the Black Hills, thus setting off the war himself. But the reference to the real Custer’s favourite song “Garryowen”—albeit not the most significant aspect of Custer’s life—is faithful to History.

Interestingly, Walsh does not introduce Indians as savages and enemies, as they were usually portrayed in Western films of the period. Native Americans are shown in a positive light, as good people who are attached to their land and respectful towards White people. Crazy Horse appears as Custer’s counterpart, as a brave and honest man who is ready to defend his land and traditions. In this respect, Walsh’s film seems to depart from the traditional portrayal of Indians as uncivilized savages.

Some small filming errors are funny, such as the shadow of the microphone during the scene where officers are discussing the cadets’ graduation, or the clouds that are not synchronised with the motion of the camera in several battle scenes.

The plot is classic and very predictable: this is the story of a courageous and brave soldier-turned-General, who leads his troops from one victory to another, and who falls in love with a lovely lady. Released in 1941, the historical inaccuracies could be a choice of the director in order to glorify American values and to encourage and stimulate his fellow countrymen in the context of World War II.

This being said, They Died with Their Boots On is an epic Western with great battles and great actors, and with just some regrettable lengthy passages here and there.