We have much pleasure in announcing an important discovery made by M. Daguerre, the celebrated painter of the Diorama. This discovery seems like a prodigy. It disconcerts all the theories of science in light and optics and, if borne out, promises to make a revolution in the arts of design.

These words were published in La Gazette de France and in the British journal The Literary Gazette in January 1839[1]. In order to understand what this praise refers to, we need to jump in time to 19 August 1839. On this day, a crowd of citizens had gathered outside the Institut de France. Inside, the Academies of Sciences and the Arts were assembled. Three men were sitting in the middle of the room: Louis Jacques Mandé Daguerre, a French artist and printmaker, Isidore Niepce (the son of Nicephor Niepce, Daguerre’s deceased partner) and the influential astronomer François Arago.[2]. Daguerre was about to reveal the process of his invention, which he called daguerreotype. The daguerreotype was a totally new way to capture and fix images and the population was eager to discover the secrets of this new medium after a 7 months wait. Within a few years, this invention led to a cultural craze called ‘daguerreotypomania’. How can we explain, then, that this medium that created such passion, faded into oblivion twenty years later?

A technical and social revolution

Malcolm Daniel, a curator and scholar of photography, explains concisely the principle of the daguerreotype. First, you took a ‘highly polished, silver-plated sheet of copper, sensitized with iodine vapors’. Then, you exposed it in a camera obscura, a black box generally used by painters who could look into it to see a reversed image of reality. Finally, to develop the picture, you exposed it to ‘mercury fumes’ and fixed it ‘with salt water’[3]. In most cases, the object obtained was protected with glass and framed. This black and white picture which could sometimes be hand colored[4] and depended upon both chemistry and a mechanical process, was in French chemist Gay-Lussac’s words ‘a new art in the middle of an old civilization’[5].

The first images captured were unanimated ones such as still lives and landscapes. This was explained by the long exposure time daguerreotypes required at first (more than 30 minutes[6]). As the exposure time was reduced, the images started representing human subjects. Before Daguerre’s invention, the only ways to reproduce images were painting and engraving. The latter were reserved to the upper classes: if you wanted a portrait of you or/and your sweet family, you had to pay the price. But in the mid XIXth century a market economy had developed with a new middle class and this would be a customer base for the daguerreotype[7]. Now citizens could go to the shop, sit for a few minutes and wait for their silver double to appear. Then, they could conserve it preciously in their pocket and admire it whenever they felt like it.

However, daguerreotypes were also used for a more surprising kind of pictures: post mortem ones. As Guillaume Roche, journalist for the French magazine Premiere explains, post mortem daguerreotypes were inspired from the artistic genre ‘memento mori’ that already existed in painting. ‘Memento mori’ was a way to accept human mortality and was not considered as taboo as today. When people suffered the loss of one of their relatives, the invention appeared as a solution for those who wished to keep a souvenir of their loved ones. Daguerre had found a way to make people immortal, of fixing time and reality in a cheap single silver picture[8].

Word of Daguerre’s invention began spreading in January 1839. Curiosity about the procedure kept growing in France but also all around the world. In December 1839, the French illustrator Théodore Maurisset draw a cartoon entitled ‘La daguerréotypomanie’ about the ‘rush’ provoked by the official publication of the daguerreotype process. You see people queuing to obtain their picture, to take lessons, or to buy materials. If you look closer, you can even distinguish men hanging themselves; as the Library of Congress explains, Maurisset wanted to represent ‘the death of art in the birth of photography’[9].

With the appropriate material and chemicals and by following conscientiously Daguerre’s instructions, anyone could make his/her own daguerreotypes. Artists, jewelers and even people who had no knowledge of chemistry or the arts opened daguerreotype studios[10]. These daguerreotypists were itinerant or owned their workshops, which were particularly numerous in Paris. However, daguerreotypists also worked in smaller French cities but had to face competition from the capital. They dreamt of a new life based on huge profits thanks to the popular item, but they were not the only ones.[11]

Migration of the daguerreotype

The French government had purchased the rights for making public Daguerre’s process in exchange for a life pension. Therefore, there was no patent, and the document explaining the making of a daguerreotype could be translated into dozens of languages[12]. It developed in many countries but one in particular adopted this new process very quickly: the United States. Samuel Morse, inventor of the telegraph, had met Daguerre even before the revelation of the process. He expressed his admiration for the French invention to the American Academy of Design on 24 April 1840: “I should feel, gentlemen, that I had been greatly deficient if I did not add a few words attesting my admiration for the genius of the great discoverer of this photogenic process”[13].

The same phenomenon that happened in France occurred in the United States. People ran to the workshops to be immortalized and again some decided to open their own businesses. For instance, an American painter, George Fuller, wrote to his father on April 11, 1840 to explain to him the advantages of the ‘drawings produced by rays of light upon a plate, chemically prepared’. He calculated that the whole material would cost him $61 and that he could make $5 per picture by selling it at $7 ($2 spent for the plate and glass). In a fortnight he could recover his investment[14]. The New York Daily Tribune estimated in 1853 that 3 million daguerreotypes were produced nationwide each year[15].  So why did something that worked so well fade away?

All good things come to an end 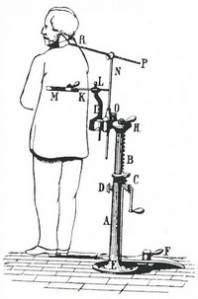 Despite its rapid success, the daguerreotype lasted about twenty years. Did Daguerre’s death in 1851[16] provoke it? Not really. The daguerreotype had several drawbacks that made it vulnerable to competition from new technologies. It took between 3 and 30 minutes to obtain a picture. Compared to today’s instant snapshots, this seems quite long indeed. It was awkward for the subjects to stay immobile and that explains the fact that many of them did not smile in the pictures that still exist. The fragility of the object was also problematic. The picture could disappear if you touched it. Daguerreotypes faded over time and needed to be restored in order to be as detailed as they once were. Nevertheless, the main disadvantage of the technique was that the picture obtained was not reproducible; every daguerreotype was unique. The only way to share a picture was to physically show the object to someone[17].

In addition to these flaws, new competitors appeared and stole the show from the daguerreotype. These new adversaries definitively marked the end of Daguerre’s invention. One of them was the calotype (or talbotype). It had been developed by the English scientist Talbot at the same time as Daguerre. Nevertheless, Talbot had patented his invention in 1841, and he sued everyone who used his process, inhibiting it from spreading as fast as its French cousin. While Talbot was fighting for his rights, the world was enjoying Daguerre’s instructions. However, the English man’s technique finally superseded the daguerreotype. It was printed on a less expensive medium, paper, and was based on a negative/positive system that made it reproducible. Sadly for Daguerre, the calotype is therefore often considered as the ancestor of modern photography[18].

In 1839, the daguerreotype became a technical, social, cultural and economic phenomenon. For approximately twenty years, many people went to workshops to get their daguerreotype portrait. These shops were owned by professionals, or amateurs who gave it a try in hopes of making a profit. The invention was as successful in its country of origin as in its close and distant neighbors and particularly in the United States. However, its flaws could not face competition. With the spreading of cheaper, easier and faster technologies the daguerreotype’s days were numbered.

This example proves that the way an inventor chooses to share his/her creation matters: you can decide to make your invention public, as Daguerre did, and receive a State pension in exchange for your secrets. Or, you can be more protective like Talbot. However, even if an invention spreads quickly, it does not mean it won’t be superseded some day. Even though it did not last long, the daguerreotype will remain in a unique category, the category of the mirror picture. Put it in front of you and you will see the portrait; turn it a bit and you can admire your reflection.

[4]Isenburg, M. “The making of a daguerreotype” The Daguerreian Society. 2001.

[7]Mattiso, B. The Social construction of the American daguerreotype. n.d.

[10]“America’s First Look into the Camera: Daguerreotype Portraits and Views, 1839-1862/ Historical Issue-Analysis and Decision-Making: The Rise of Photography to an Art” Library of Congress. n.d.

[14]“A letter from George Fuller to his father, Aaron Fuller”, The Daguerreian Society. n.d.

This site uses Akismet to reduce spam. Learn how your comment data is processed.