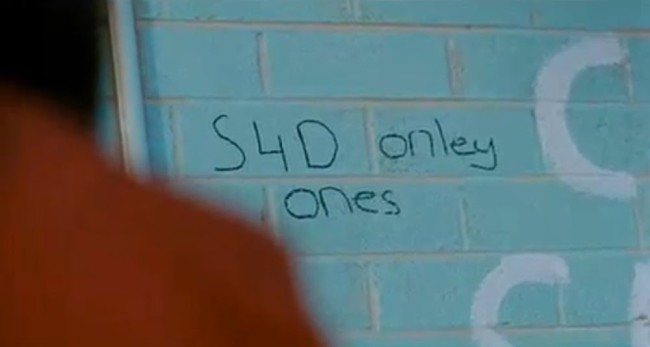 One of the most puzzling elements in Thornton’s movie is the almost complete nonexistence of dialogue. Still, the absence of spoken words is counterbalanced by the use of a wide range of other means of communication, such as gestures, actions, gazes and sign language; an alternative range of communication means very popular in Aboriginal culture.

The least that can be said about Samson and Delilah is that they are an exception to the rule of clichéed declarations of love one usually finds in a romantic movie. Each understands the other perfectly well without exchanging a single word, and quite effectively manages to fill in the gap left by the absence of spoken words. Why, and how ?

Shyness, pride, honor.. None of these terms seems to offer a satisfying response to the absence of dialogue between the two characters. Delilah is only shown speaking to her grandmother, while Samson never talks to anybody, even to his brothers. The very few spoken interventions were actually a decision on the part of Warwick Thornton, both for realism’s sake and to insist on the two characters’ use of alternative means of communication.

In Samson’s case, the absence of spoken words might also be explained by the deteriorating effect that sniffing petrol can have on basic human skills such as talking. At the same time as it weakens his capacity to communicate, it all the more reinforces his isolation and singularity in a world that he is visibly alienated by. Consequences of petrol sniffing addiction can furthermore be found in his elocution: as the filmmakers themselves suggest, he has indeed a speech impediment. The viewer only discovers it when Gonzo (a homeless man “living” under the same bridge as them) threatens him not to share his food with them if they don’t “fucking say something”.

How To Make It Without Words and Spoken Communication

For some people, the inability to speak « out loud » with others can consist in an obstacle awfully difficult to overcome. But not for Samson and Delilah. The two teenagers resort to a wide range of means that replace the verbal speech they cannot count on. An alternative way to communicate that goes along with Aboriginal culture itself, in which actions, signs and looks do often mean more than words.

Sign language occupies a non negligible place in the voiceless means displayed by Thornton in his movie. The reason for that might be its central role and signification for Aboriginal communities and in Aboriginal tradition.

Very widely spread in Central Australia, sign language varieties are very numerous. Since the action takes place near Alice Springs, one may argue that the sign language used in Warwick Thornton’s film is Western Desert Sign Language. As Adam Kendon writes in Sign Language of Aboriginal Australia, historically, sign language could sometimes replace speaking discourse for quite large periods, on several occasions belonging to Aboriginal folklore. Men’s deprivation of verbal communication occurred for example during their period of initiation, a time when they learn the basic skills a “real” Aboriginal man has to master in order to be recognized as such. In the case of women, sign language would be extensively used during periods of mourning, as a sign of respect and of meditation. Geographical remoteness is also sometimes considered as an additional context of use of this language: the very long distance between a person and another sometimes rendered voiced communication useless, forcing people to find another way in order to make themselves understood.

In Samson and Delilah, it seems that the use of sign language draws on a popular motive on the part of the filmmaker to throw light on traditional Aboriginal custom that gives spoken communication a less important place than in other societies or communities.Many scenes of the movie show Samson and Delilah resorting to sign language to communicate. For example, at the very beginning, Samson brings his hand to his mouth, a gesture that would be the equivalent of a spoken “Can I have something to eat?”.

Gestures can sometimes produce humor where words would not. In another scene, Delilah’s gestural response to Samson’s awkward way to express his feelings of gratitude after she gave him food is as funny as explicit: she successively throws a stone at him before sweeping air with her arm, her gesture meaning “leave me alone”.

More traditionally than sign language, looks and facial expressions are part of the most common features of cinematic language used in cinema. These elements complement the use of sign language in the movie, as well as they contribute to reinforce non verbal communication use if the film in general.

As Delilah’s grand mother’s sentence suggests it, eyes and eye contact play a prominent role in the socialization process between two people, and may express a lot, consequently strengthening voiced speech or clearly expressed thoughts. In the case of Samson and Delilah, the visual appears as an extremely important feature in terms of understanding. 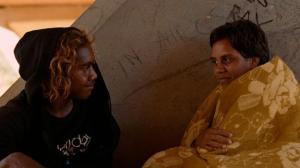 In many scenes, a simple look almost tells more about what’s going on than a conversation. In the first scene showing the two main characters, Samson looks at Delilah as she’s walking towards the drugstore, but she does not give him his look back…until she has made sure that she was out of sight to watch him herself.

In addition to the exchange of looks, smiles also weight a lot in the two lovers’ alternative mode of communication.Inherited from Aboriginal storytellers, who used it a lot to convey emotions and give credit to what the stories they were transmitting, facial expressions ( see “body language” entry) are part of non verbal communication in Aboriginal communities and are traditionally considered as more efficient and powerful than spoken words.

The tragic destiny both characters are going through in addition to the overall « silence » that characterizes the movie reinforces the impact of the rare but incredibly powerful smiles they exchange. These occur mostly in situations of relief, or when one desires to express his or her affection to the other, as illustrated by Samson’s frank smile when he discovers that Delilah is alive and has come to save him.

Action/ Reaction : The Use of Body Language

Gestures and actions also play a prominent role in making up for the lack of spoken dialogue between the two, visually transcribing the characters’ desires, expectations, state of minds or feelings. Not to be mistaken with sign language strictly speaking, it concerns the physical and is less a particular Aboriginal practice than a universal one.

« The Kiss » scene in Samson and Delilah

Very often, body language is used to show something to the other or to try to make him or her understand something that goes beyond words. In that respect, Samson’s throwing stones at Delilah has no other goal but to get the attention of the girl, who still ignores his attempts to seduce her at the beginning of the film. In another scene, Delilah combines two actions: that of removing Samson’s petrol tin can away and of kissing him on the forehead. The two smile at each other but the boy still gets his tin can back immediately. This combination of actions makes the viewer understand without any vocal comment that although both are conscious that sniffing petrol won’t do any good to Samson, addiction is stronger than anything else, even love.

Thornton manages to put the issue of communication at the very heart of his movie by drawing on popular and focusing on means of communication different than usual verbal one, showing how “alternative forms” such as sign, body language, looks and facial expressions complement and form a system of meaning sometimes more powerful than spoken words would be. At the same time as it becomes a part of typical cinematic language, sign language also appears as an invitation to the discovery of Aboriginal culture, its rituals and traditions. Samson and Delilah in this movie are the very proof that dialogue is not necessarily vocal: it is actually through silence that both manage to make themselves heard loud and clear.