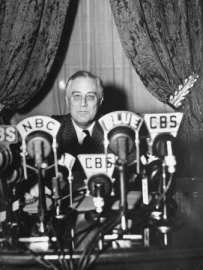 In 1662, the Congregatio de Propaganda Fide (Congregation for Propagating the Faith) of the Catholic Church was created to propagate the Catholic faith in countries that weren’t Catholic. Propaganda, or the attempt to influence people to act and see things in a certain manner, has existed in a range of forms ever since. The most notorious use of propaganda occurred during World War II, when Adolf Hitler’s Nazi Party had almost complete control over everything that was published and broadcasted. But there have also been less extreme forms of propaganda. A US government agency was created during World War II in order to inform people of the situation, the Office of War Information. Its main goal was to coordinate the war news, using mainly radio broadcasts such as This is Our Enemy. Also, there were President Franklin D. Roosevelt’s fireside chats which were broadcasted on the radio and used to promote patriotism and avoid “false” rumors. Can these radio broadcasts, especially Roosevelt’s fireside chats, be considered as propaganda? They were propagandistic in the sense that they sought to accomplish certain official goals and influence the American population.

In 1920, wireless broadcasts began to spread rapidly. It marked the beginning of regular, commercially licensed radio broadcasts in the United States and it ended the print monopoly of mass media. Newspaper and magazine sales decreased with the rise of the radio. By 1928, three national radio networks existed, two owned by the National Broadcasting Company and one by the Columbia Broadcasting System. Radio provided information much faster than newspapers, and the voice coming out of the radio really felt like someone was talking to you directly. That is one of the reasons why radio became so popular in such a short period of time. People became fond of this kind of news.

With the increase of the use of radio, officially sponsored programs like President Franklin D. Roosevelt’s fireside chats became crucial to get information and to understand what was happening in the US.   Roosevelt broadcasted a series of thirty “episodes” between 1933 and 1944; the first one, On the Bank Crisis, was broadcasted during the Great Depression, on March 12th 1933. In this fireside chat, President Franklin D. Roosevelt starts by saying “My friends”, and then explains everything about the bank crisis, how banks work, what had gone wrong and what the government planned to do. Moreover, he speaks like he is talking to an ordinary American citizen, giving each piece of information in a refreshingly simple English. In fact, eighty percent of the words he used were in the one thousand most commonly used words in the English dictionary. Everything was thought and done in order to make Americans feel close to their president and their country. The president spoke as if he was sitting with friends in a warm and cozy corner near a fireplace, creating an illusion of privacy. Due to this level of intimacy, Americans trusted him and he was thus able to do whatever he wanted without too much dissent.

During World War II, fireside chats had an important role in the communication process between the state and American citizens. Battlefields were far away from the United States, mainly located in Europe and Asia, so it was quite difficult for the American population to understand the gravity and extent of the war. For instance, in Roosevelt’s fireside chat of September 3rd 1939, On the European War, he explains why the US needs to get involved in this war and how it is going to be. He also insists on the fact that Americans are well informed of everything that is happening and the government hides nothing from them: “You are, I believe, the most enlightened and the best informed people in all the world at this moment. You are subjected to no censorship of news, and I want to add that your Government has no information which it withholds from you or which it has any thought of withholding from you[1].” When he says that, the president is really looking for support from his people. He wants to show them that he trusts them to be a part of America’s victory. Moreover, in another one of Roosevelt’s fireside chats, he tells the audience to take out their maps in order to follow the operations of the army, so that Americans feel totally involved. In fact, these fireside chats were there to increase support for the war and commitment to an Allied victory: Americans had to understand that World War II  was their war. The chats also encouraged Americans to work in war factories, so that the US would have enough supplies to win. They were broadcasted to encourage patriotism and get people to think a certain way.

There were other programs that could be considered as propaganda, such as This is Our Enemy. This radio program dealt with Germany and the Axis powers and was supported by the United States Office of War Information. This agency was created during World War II and was in charge of the consolidation of government information services. In other words, the Office of War controlled every piece of news that was released about the war. This is Our Enemy was created to depict the enemy through a series of war stories. Even the introductory music announces that the devil is coming. As with the fireside chats, when the speaker addresses the audience, the audience is made to feel close and involved.

Some people don’t think that the fireside chats or This is Our Enemy could be considered as propaganda, but propaganda exists in a range of forms. There are extreme cases, such as the Nazi Regime during World War II or Stalin’s Regime during the Cold War. In those totalitarian regimes, propaganda is everywhere. The ideas and statements are usually false or exaggerated and spread deliberately to make people support a political leader and his cause, such as Hitler’s “Aryan race”. On the other hand, there are cases like the United of America, which used “democratic propaganda”. To illustrate this idea of democratic propaganda, here is a quotation from an Austrian-American writer, Edward Bernays, a specialist of public relations and propaganda: “The conscious and intelligent manipulation of the organized habits and opinions of the masses is an important element in democratic society. Those who manipulate this unseen mechanism of society constitute an invisible government, which is the true ruling power of our country[2]”. Roosevelt’s use of common vocabulary and intimate forms of address is an example of what Bernay’s calls “conscious and intelligent manipulation.” He uses this kind of manipulation so that people feel close to him and want to get involved in the war. Bernays states that propaganda is one of the main powers that politicians have, especially during times of war. People are scared and weakened by the war atmosphere. By fostering a closer relationship with people, governments hope to prepare them for war. Roosevelt encouraged them to work in war factories and produce weapons for battlefields in Europe during World War II or to set up “victory gardens” where Americans grew their own food, used as an alternative to rationing. By 1945, there were almost 20 million “victory gardens” in the US and they represented 40 percent of all vegetables consumed in the US during WWII [3].

However, one should underline an important difference between totalitarian and democratic propaganda. In a totalitarian regime, propaganda is set up in order to close people’s eyes to government’s bad actions such as Hitler’s concentration camps. Democratic propaganda, as in the American case, seems to serve better interests than that. It surely was set up to hide things from the population but in the end, they won the war and helped other nations involved in this war. Such propaganda is not necessarily better but it is different.

Realizing that citizens can be influenced in times of war, without really noticing it can be frightening.  All in all, propaganda remains a dangerous tool if it falls in the wrong hands and can lead to extreme consequences such as a world war, but it is also an element that is embedded in modern citizens’ lives: they are conditioned in a certain way and it tends to keep things in order. Tuning in kept the Americans on the road to victory. By making people work together and feeling like they were a strong nation, these radio programs helped the US defeat its ennemies: united we stand, divided we fall.

[1] President Franklin D. Roosevelt of the United States of America, On the European War Fireside Chat of September 3rd, 1939.