Television sketch-comedy programs used to be considered the epitome of peculiar British Humor, nationally and internationally. The comic groups using the thirty-minute format explored philosophical concepts, political issues, characters or situations through a series of short comedy scenes (‘sketches’) that lasted between one and ten minutes. Some of these sketch shows ran several years (The Benny Hill Show ran for 19!). Today, it seems that the British sketch-comedy program is in the midst of a crisis. The genre seems to lack the innovative spirit that once made it so rich and popular. The rise of YouTube as a platform for comedy programs has also posed a challenge to the traditional thirty-minute format that used to characterize the genre.

Television sketch-comedy programs started to develop in the 1950s-1960s in the United Kingdom, when television became common in homes and a vehicle for entertainment. Sketch-comedy has its origins in vaudeville and the music hall: writers and comedians drew their inspiration from the kinds of comic situations typical of these venues. The sketch-comedy genre moved from stage to radio, and then to TV. Some comedians had a radio program before or co-existing with the TV versions, such as Benny Hill, Monty Python and A Bit of Fry and Laurie.

The success of a television sketch-comedy program is dependent upon the ability of individual actors to innovate and experiment. This genre has no codes or constraints (except the short-duration of the sketches). Comedians can explore any theme they want (history, society, politics, news…), in any style of humor they want (parody, satire, the absurd…). Freedom is its greatest asset, even if sometimes it means that some sketches won’t be understood. That was the case of The Benny Hill Show. When the show first aired in 1955, it was a flop. The Daily Mirror wrote that it was “patchy and lacking cohesion”. But the show went on to become very successful and ran until 1991 in more than 140 countries. Benny Hill adapted his show in response to early criticism. He became very popular with his slapstick and double-entendre. The same phenomenon occurred with The Monty Python’s Flying Circus, a touchstone in the world of sketch-comedy. The first episode of the show, broadcast on October 5, 1969 (late in the evening) attracted just three per cent of the TV audience. By the end of the first series, they had seduced the whole country. Perceived as cynical at first, their surreal and meta-comedy humor, which played with philosophical notions, conquered audiences through space (reaching America) and time.

Between the 1950s and the 1990s, British television sketch-comedy shows were constantly innovating. The shows evolved in several respects. Humor was not the same throughout the period. Even if British humor is known to rely on satire, this subgenre has specific means of expression. The Benny Hill show relied on physical gags, disguises and mimicry. The Monty Python show (1969-74) launched a trend of surreal humor, playing with intellectual notions, nonsense and meta comedy. Not The Nine O’Clock News (1979-82) was more violent and explicit in its criticism of society, and it created an alternative form of comedy, distancing itself from Monty Python. Hugh Laurie and Steven Fry, in A Bit of Fry and Laurie (1989-95) developed wordplays and innuendo very well.

Comedians also developed technical processes that helped to define the genre more precisely. For example, in 1969, Monty Python’s Flying Circus ‘introduced’ the absence of a final punch line to their sketches and used cartoon animations between sketches. From then on, the sketches that composed a show tended to be unrelated (with the exception of some characters that appeared several times, such as Mr. Grumby). They also broke the rule of the “fourth wall” by talking directly to the studio audience, referring to the sketch they were performing, and bringing the camera backstage. This technique was also used in A Bit of Fry and Laurie. In The Fast Show (1994-97), the sketches were very brief (they lasted no longer than three minutes) and the comedians introduced recurring gags and catchphrases, ideas that influenced the next generation of shows. 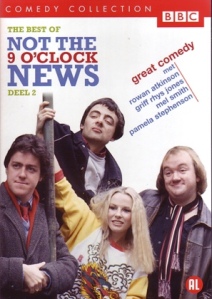 Sketch-comedy also mixed with other genres and became a hybrid form. Indeed new television comedy programs emerged at the same time sketch-comedy programs developed, such as sitcoms (about recurring characters dealing primarily with one situation) and stand-up (a comedian talks to the audience about issues of everyday life). The introduction of recurring patterns and characters in the sketch-comedy shows brought them closer to sitcoms. Consequently, the two kinds of program are often put into the same category. Moreover, some comedians who used to act in sketch-comedy shows continued their career as sitcom actors (the most famous example being Rowan Atkinson who started in Not the Nine O’Clock News and then embodied Mr Bean between 1990 and 1995). Sketch-comedy shows not only integrated other types of humor but also other kinds of performances. For example, Hugh Laurie often played the piano or the guitar and sang (humorous songs) in A Bit of Fry and Laurie. Musical numbers were common in their shows, and may be one of the reasons audiences appreciated this program so much.

Has it come to a dead-end?

After almost forty years of innovation, it seems that since 2000 the sketch-comedy show has lost steam. Indeed, the latest sketch-comedy shows broadcast on UK channels are repetitive and don’t deserve to be shown on TV according to Graham Linehan, the creator of several successful comedy-sketch shows including The Fast Show and Little Britain (2003-2006), which were great success. Linehan said to The Independent in 2009: « It’s something that has been done and now I think people should definitely stop doing sketch shows that rely on repetition. […] Our job, as comedy writers, is to create new things and that involves taking risks and I think, at the moment, there is a lack of risk in British comedy. » The same year, BBC 3 channel launched a new comedy-sketch show in hopes of attracting audiences. The show, called Horne and Corden, was such a failure that the BBC decided to stop it after the sixth episode, which was watched by only 434,000 people.

Is the decreasing appeal of sketch-comedy shows related to the emergence of the Internet as a major entertainment platform?  Is the TV sketch-show condemned to death? These questions are a matter of debate today, and maybe it is too early to answer. But it is true to say that habits of consuming sketch-comedy have considerably changed since the creation of YouTube, the video-sharing website, in 2005. The conditions are not the same when you watch a sketch-comedy show on TV and when you watch it on YouTube. On the Internet platform you can watch the show wherever and whenever you want. You can select the sketch you want to see and switch if you don’t like it. You can watch a classic sketch and then watch a new generation sketch. According to James Kettle, a journalist writing for The Guardian in 2009, YouTube is a “comic jukebox” that makes the thirty-minute format of a TV sketch show irrelevant nowadays. This pessimistic opinion about TV sketch comedy programs is balanced by more optimistic views, such as that of Alex Rochford, a journalist for The Independent who wrote in 2012 that “the new generation of consumers, whose attention spans have been programmed to two minute internet clips, have not so much killed off sketch comedy but forced it to reinvent itself.” He points out that the sketch-comedy programs had to adapt and innovate, once again. He thinks that they may not have the form we used to know but that the spirit of sketch-comedy lives on.

TV Sketch-comedy is not K.O!

Sketch-comedy programs are facing a transition. Technological change – above all the spread of the Internet – may have changed audience expectations. In any case, sketch-comedy shows will have to adapt and innovate – as they always have – to survive and make people laugh. Innovations could be made in the type of humor with new concepts, or in the field of technical performance. Or maybe comedians could also experiment with how they interact with the public, in order to attract new audiences. There are creative minds out there who will find new ways to make us laugh.