Marlon Brando was already well-known as an excellent actor when One-Eyed Jacks (1961) revealed that he was also a talented director. He played with the codes of the Western genre and with cultural clichés to create a unique movie, whose peculiar richness is based on ambivalent genres, human characters, landscapes and atmospheres. 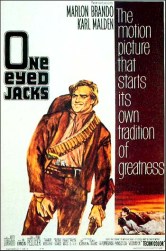 After a bank robbery in Sonora (Mexico), Rio, aka the Kid (Marlon Brando), is betrayed by his companion Dad Longworth (Karl Malden) who runs away with the loot. Five years later, the Kid escapes from jail and crosses the plains and deserts of Mexico and California to kill him. Freely adapted from The Authentic Death of Hendry Jones, written by Charles Neider, One-Eyed Jacks is a story of revenge. But Brando gives more importance to the characters and their ambiguities than to the act of revenge itself. Otherwise, Rio would have fulfilled his desire after forty minutes of the film, when he finds Dad in Monterey. Brando designed characters with deep and complex personalities who hide their true feelings from one another. The most brilliant scenes are doubtless the different confrontations between Rio and Longworth: when they first meet at Longworth’s house; when Longworth whips Rio and crushes his hand; or when the Kid, while in jail, finally reveals he had been caught by the Mexican police in Sonora. The tension between them becomes more and more tangible throughout the movie, as the unspoken hatred is eventually expressed through violent words and deeds.

One-Eyed Jacks is based on lies and treachery, and on the fact that each of the main characters tries to hide a part of his (or her) personality. But Marlon Brando shows that they have different profiles and that it is impossible to keep them secret from everyone. Behind his natural gift of seduction and his unfeeling looks, Rio is a staunch advocate of women’s safety and is always ready to fight to protect a woman. Longworth, a former bandit elected sheriff by the people of Monterey, is supposed to be a fair representative of law and justice but he is violent and quite sadistic, as is Lon, his repulsive and coward deputy (very well interpreted by Slim Pickens). The female characters play their cards close to their chest, too: Maria (perfectly performed by Katy Jurado), Longworth’s wife, is wise and lies to her husband in order to protect her daughter Louisa (Pina Pellicer). The latter, in love with the Kid, is seen as a perfectly respectable young lady by the citizens, but she hides from Rio that she is pregnant and brings him a Derringer when he is in jail. 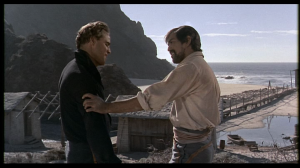 Brando also had the original idea to play with the common “rules” and expectations of a basic Western, even in the final gunfight. Rio is an outcast (he is a bandit who lies and cheats) who gets along with the other outcasts, such as prostitutes and immigrants: his only true friend is Modesto (a Mexican interpreted by Larry Duran) and he treats the Asians with respect in their “hotel” after Longworth has injured him, whereas the others despise them.

While Brando succeeds in giving depth to his characters, the introduction of romance is quite disappointing. It comes far too mushy at some point, mostly because of the music used to raise empathy every time the couple meets. Violins cry too loud and too often. There is much more beauty in the varied and incredible landscapes than in the romantic scenes. 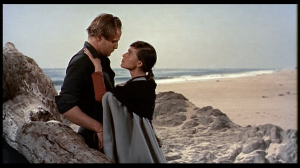 Apart from the too “honeyed” aspect of the movie, One-Eyed Jacks is really worth watching, for Marlon Brando’s appropriation of the Western codes is quite unique and daring.